With arid land, heatwave, and remoteness, Upper Mustang might not seem an excellent choice for a trek. But, what if you don’t have to walk a mile to feast on the picture-postcard views of this ancient Tibetan kingdom?

Strange as it may seem, but travelers won’t have to navigate the rugged path with the Upper Mustang Helicopter Tour. They can easily escape the winding trails filled with rocks and boulders by opting for a picturesque flight from Kathmandu.

Nepal’s hidden treasure, Upper Mustang, has numerous famous landmarks and impressive sites to explore. There are deep gorges, magical ravines, and remote settlements inhabited by Thakali people, which exhibit the culture and heritage of the region.

It’s hard to resist the allure of Upper Mustang, especially with so many epic places. But, the one that has made every people’s jaw-drop with its natural splendor and magnificence is Lo Manthang, a rural village in western Nepal.

Cradled at the northern end of the Mustang district, Lo Manthang is the most popular destination in the Upper Mustang. It’s the first choice for many travelers who stop at the village as there are plenty of incredible places here.

The Upper Mustang Helicopter tour kicks off with a picturesque flight from Kathmandu to Pokhara and Jomsom. It doesn’t last long but comes with an impressive vista. Shortly afterward, the aircraft flies to Lo Manthang, where it stops for a few minutes so that you can explore the place, and we head back.

Why Choose this tour?

Phase 1: Kathmandu to Jomsom via Pokhara

Phase 4: Jomsom to Pokhara to Kathmandu

The Upper Mustang Helicopter tour starts with a short flight from Kathmandu to Pokhara, which lasts nearly half an hour. The trip is enthralling with the spectacular views of Rara lake and Annapurna. Flying over the beautiful city of Pokhara, we head towards Jomsom in Ghapranjong.

The expedition takes another 20 minutes, during which you can catch a glimpse of the Kali Gandaki River, deepest ravines, and mountain ranges. On the way to Lo Manthang, we get to view diverse landscapes, rocky cliffs, and rhododendron forest.

After a flight of an hour, we’ll arrive at Lo Manthang, a beautiful Tibetan village at 12,600 ft. high. As the flight stops at the town, you can take a tour of the kingdom, which is quite impressive.

Nestled at the northern end of the Mustang district, Lo Manthang is a walled capital. It’s blessed with primeval gompas, white-washed mud-brick walls, and historical sites. The Royal Palace in Lo Manthang exhibits ancient Tibetan culture and takes the visitors back in time.

There are many hidden caves and primordial monasteries, which you can explore during the visit to Upper Mustang. On a clear day, visitors can spot Annapurna and Dhaulagiri from the hilltop. After the sightseeing is done, we’ll board the flight and fly back to Pokhara via Jomsom.

Same as previous, the trip provides an incredible view of Tibetan plateaus, eroded cliffs, and deep canyons. From Pokhara, we’ll head back to the valley, which takes roughly 10 minutes and comes with a lovely sight of wild forest, cascading waterfalls, and lush meadows. As soon as the heli lands at Tribhuvan airport, we’ll drive you back to the hotel, where you can get some rest.

There’s no doubt that the Upper Mustang is staggering with dazzling valleys, rock formations, and sandstones. But, it’s the weather that often puts trekkers in distress and makes them think about whether or not to travel the region.

Fortunately, it’s the last thing to fuss over for visitors taking the Upper Mustang helicopter tour. Besides the harsh weather conditions and blizzard, travelers can enjoy the expedition anytime they want. Still, if the travelers want to enjoy the most astounding scenery, they better visit the town in Spring or Autumn.

Autumn is a great time to hover above Mustang valley and catch the splendid view of rolling hills, colorful layered mountains, and red plateaus. It offers a vibrant atmosphere with clear skies, making the trip more intriguing than all of the season.

The weather is magnificent during Autumn, following warm sunshine and fresh air. With the strong visibility, passengers can catch a glimpse of shimmering snow peaks, sweeping landscapes, and gushing rivers.

During the season, temperatures range from 12 to 20 Degree Celsius in a day. Mornings and nights are slightly cold but still enjoyable. The scenes are astounding in Autumn with fall foliage, colored rock cliffs.

Another season that makes travelers appreciative of the Upper Mustang Helicopter tour is Spring. It stands moderate weather with beautiful sunshine, making it lovely to fly to the kingdom. Visitors can check out the steep-sided valleys with deep gorges and lofty hills during the trip.

Provided the clean air with sunny days, passengers can easily catch a glimpse of Dhaulagiri and Annapurna. They’ll also get to have a sneak peek of Kagbeni, Mustang caves, and Kali Gandaki riverbed. Spring offers breathtaking scenery of blooming flowers to visitors of Upper Mustang, which looks gorgeous.

Since the temperature rises to 22 Degree Celsius in Spring, expect warm weather with soft wind during the daytime. The famous festival Tiji also falls in May, so a couple of the fortunate visitors will participate in the religious festival.

Frigid weather and windstorm make it unlikely to trek Upper Mustang in winter. But, to those who sign up for the helicopter tour, the expedition is a satisfying experience. They don’t have to resist the frosty weather for days, finishing the trip within an hour.

The helicopter will transfer them to the kingdom in just 15 minutes. Upper Mustang appears unbelievably stunning during winter with villages and open gully covered in snow. In the daytime, visitors will be able to take a snapshot of glistening mountain ranges and glaciers.

Following heavy snowfall and mist, flights are more likely to get canceled and delayed in winter than any other season. Therefore, whenever you book the flight for the Upper Mustang Helicopter Tour, make sure to check the weather updates and plan the trip accordingly.

Since Upper Mustang is a rainshadow area, trekking is popular even in Monsoon. Visitors often travel the kingdom during the season as it comes with magnificent views. Unlike trails in the Himalayas, paths are dry, and even the flights rarely get canceled.

Travelers can spot sweeping landscapes and towering mountains, including Dhaulagiri, Nilgiri, and Annapurna. They can even explore the hidden valleys and sky caves during the stop at the town. In Monsoon, travelers will find temperatures rising to 20 Degree Celsius in the daytime.

Another way to take a tour of Upper Mustang via helicopter is from Jomsom. It’s the quickest and easiest way to reach Upper Mustang as the expedition barely lasts 10 to 15 minutes. The trip is usually taken by hikers who can’t stand the dry terrains of Upper Mustang but intend to explore the region.

The heli tour allows visitors to immerse themselves in the natural grandeur and dynamic spirit of the town. On the way to Lo Manthang, we can sight deep canyons, towering snow peaks, and rolling landscapes. After arriving at the town, we’ll take a quick stroll through the village and visit a centuries-old royal palace.

You can pay a visit to some of the Buddhist monasteries in Lo Manthang, including Jampa Gompa, Thubchen Gompa, and Choprang. Adventure enthusiast spares a brief moment from the trip to explore the hidden caves in Chhusang and Upper Mustang.

In Lo Manthang, there are many decorative paintings and ancient stone statues of Lord Buddha, which draw many people’s attention. After going to the places of interest, we’ll get on the flight and head back to Kathmandu.

The helicopter tour of Upper Mustang typically costs between US$1,500 and US$2,000 per person. If the services available are up to the mark, then your receipt might see a slight increase in the cost.

The price may also vary depending on the number of passengers traveling the aircraft. As the fare is shared among the members, it’s better to have as many members on board as possible. However, that doesn’t mean the travelers can exceed the limit.

A private helicopter can accommodate up to five passengers at a time. So, if the travelers want to minimize the cost, it’s better to have more people on the flight. You can travel along with your family member or with strangers who’re looking for the Upper Mustang helicopter tour.

The helicopter tour of Upper Mustang is viewed as a life-saver by hikers who are unable to walk the rugged trail. It helps them enjoy magnificent views without having to put up with the nerve-wracking courses. Unlike trekkers, the Upper Mustang Helicopter Tour voyagers won’t have to spend hours and hours passing through villages and beating the rough terrains.

Taking a private heli tour of Upper Mustang helps save travelers a lot of time compared to trekking. They don’t have to spend extra hours in the queue to catch the flight or get through the lengthy process to enter the aircraft. Astonishingly, travelers can even schedule their flights without any complexities.

Upper Mustang Helicopter Tour offers visitors splendid sceneries from the moment they get into the flight. It displays a breathtaking view of rolling hills, snow-covered mountains, and steep-sided valleys before arriving at Jomsom.

From there, it treats visitors with the sight of deep gorges, stunning landforms, and high plateaus. They get to catch a glimpse of soaring cliffs, steppe grassland, and villages during the voyage. Lo Manthang packs the most magical places of all, including historical and cultural landmarks.

It’s no secret that Upper Mustang is one of the isolated places in Nepal with off-the-beaten paths and extreme weather. A lot of places here are out of people’s reach, and even if people manage to get there, they have to survive without any services.

As a result, most travelers prefer taking a helicopter tour of Upper Mustang. The trip allows them access to distant locations where it’s impossible to trek. They also do so to avoid spending excessive amounts of time on the tour.

For a non-trekker, the Upper Mustang Helicopter Tour is a prize worth winning as they don’t have to bear the stress of navigating the trials. The flight makes the excursion extremely easier without having to walk a bit. They are more comfortable with enough seats for five passengers. Travelers will even get their own guide who’ll help them explore the kingdom and learn about it.

Those who’re doing a private heli tour of Upper Mustang will get to enjoy an array of services, including privacy. Passengers can relish the trip without any disturbance and clamor. Unlike commercial flights, they can carry extra luggage if needed during the Upper Mustang Helicopter Tour.

Thank you. Your review will appear after admin approves it.

Please fill all the fields. 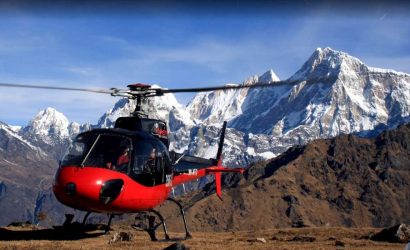 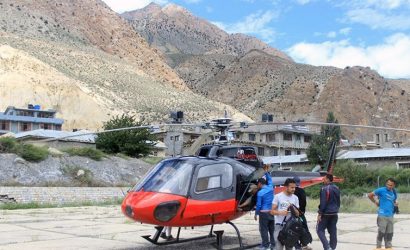 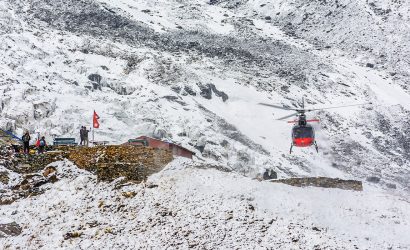 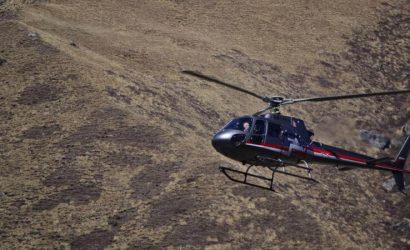